Moved to Gurgaon from Bangalore around end of Feb. Just starting to explore the routes here, but enjoying cycling around this side of the country.

Did this ride around end of Feb. Wanted to start exploring the routes around Gurgaon. Jaipur is at a distance of a little over 200 km. Did it over three days – taking a stop at Dharuhera, some 50 km from Grugaon on the first day.Second day reached Jaipur and the third day came back to Gurgaon.

Was getting lazy after moving to Gurgaon so just decided to take the cycle and get on saddle. Left Gurgaon around 3 pm and reached Dharuhera around 6 pm , some 50 km from Gurgaon. Big truck bottleneck around Manesar. Passed the NSG centre in Manesar. A very dusty patch. Decided to halt at Dharuhera as it would have started to get dark in some time. Halted at some place called Jungle Bubble or something. Didnt really like the place.

Almost the whole Delhi – Jaipur route is full of trucks with lot of dust due to road widening going on. The first half of the Delhi – Jaipur road, approx till Shahjahanpur, was especially so. The route starts to become increasingly nicer the more we come towards Jaipur. The last 30-50 km was really nice. The last patch via Amber was a nice two lane road with sparse traffic and nice landscape and small hillocks around. Really pleasant and a beautiful ride in that patch. Entered Jaipur through a big ‘Darwaja’ and crossed the area called as Pink city. Picked up some gajak from one of the shops there.  Checked into Hotel Ashish (1400). Nice place.

Left Jaipur the next day around 8 am and reached back Gurgaon around 9 pm. Took a meal break at one of the truckers dhabas around Kotputli. The first half till Shahjahanpur was fairly ok.  Had a nice meal of gobi mutter, saag and roti. The last 50 km or so after Dharuhera was a bit tough as it had gotten dark, lots of truck and lots of dust due to construction. The truck bottleneck patch somewhere near Manesar was especially bad as there was a long traffic jam extending many kilometers and the dust was so much that visibility had come down. The 10km patch around that area took me more than an hour to cross through. The clear goggles that I got from Decathlon and the mask from BOTS were a real saviour.

The 100 km or so patch near Jaipur is fairly ok with the last 30 km or so toward Jaipur being really pleasant. The whole route would probably be nicer when all the road widening is done. Seems the whole route is primarily a truckers route with a whole lot of truckers dhabas and ‘Theka- Desi/ Angreji’. In general though,  I have found truckers to drive fairly safe and am more scared of the smaller vehicles. Have almost always found the truckers to typically drive in a straight line at a steady pace and with a good honking decorum -  No honk if all is fine,  a small honk if they find they want me to be careful and a continuous honking means ‘Get Off the Road – Now !’ Same experience during my Bangalore to Jaipur tour last year and my other highway rides (most of my rides are on highways in any case).

Gurgaon – Agra – Short of Etawah and Back

Did this ride last week over three days. Earlier plan was to do the Gurgaon – Agra – Jaipur – Gurgaon triangle. But changed the plan on the first day itself as I wanted to avoid the Jaipur- GGN patch till i find a good route to bypass the heavy traffic around GGN.

The first day went to Agra, some 200km from Gurgaon. Left home around 7.30 pm and reached Agra around 6.30-7 pm. Went via Faridabad and then connected to the Agra highway. The Gurgaon Faridabad road in the morning was pretty pleasant. Was a bit of roller coaster going through small hills and most of the traffic going towards Gurgaon. Bit of traffic while crossing Faridabad, but not too much. Agra highway was pretty decent . Mostly commuter traffic and comparatively less of truck traffic. Fairly wide road (4 lane most of the way) with a decent enough shoulder most of the places. Lost my way inside Agra city in the dark and ended up on Fatehbad road. Checked into Hotel Kant (1600). Nice place. 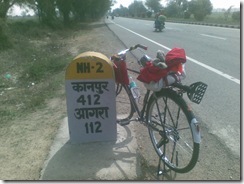 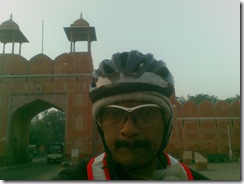 The second day left Agra around 8 am. Spent a few hours exploring the roads around Agra. First went towards Jaipur / Fathepur Sikri. Seemed like a nice and pleasant road – two lane only but sparse traffic and tree lined on both sides. Didn’t go too far so don’t know how it’s later on. Planning to explore that route upto Jaipur some other time.

Connected back to the Delhi – Agra highway and went towards Aligarh but didn’t like that route too much from initial read. Narrow road, not well maintained a seemed to have quite a bit of truck traffic.

Turned back and decided to go towards Etawah. Didn’t do towards Gwalior as Mornea falls on the way and it used to be dacoit infested territory long time back when I was a kid and we were in Gwalior. Will get some more inputs before I go that way. Was apprehensive about Etawah also, but decided to explore.

The route towards Etawah per se is nice. Wide road. Truck and local commuter traffic is there but not too much once you cross Agra outskirts. However the ‘feel’ becomes decidedly a little scary from Firozabad onwards. Started to see a whole lot of vehicles without number plates and lots of gun toting folks. Rural folks riding on a Enfield / Yezdi kind of bikes with a Gun slung over the back. Also saw a villager on cycle with a gun slung over. Though I was on a Atlas but much more staring than I am used to, maybe due to the helmet and overall attire. The folks at the Dhabas were real tough looking – almost looking like the dacoits they show on movies. Started to feel like a marked man. Was keen to go as near Etawah as possible but was not comfortable cycling back on that route in dark. Turned back some 30-40 km short of Etawah after a place called Sirsaganj.

Maybe I am a little paraniod about security now a days. Keen to go on that route till Kanpur and beyond since the route per se is nice for cycling and I was born in Kanpur ! Will probably try and get some more inputs on security aspect on that route before I go beyond Agra.

On the way back , some 50-60 km short of Agra, after a place called Shikohabad, met a guys in his early 40’s who ‘raced’ me for almost 10 km or so. I was anyways in a hurry to reach Agra. Got chatting. Very curious to know what I was up to. Answered the usual questions. We were riding similar kind of bikes (Atlas type), but his brand was different (Neelam cycles). Said his bike has a bigger gear and he can overtake me easily if we wants to (in a friendly way). I just said – sure why not. He started to pick up pace – kept a strong pace for a few kilometers – i just kept up pace with him before both of us started to slow downs. Chatted some more. He works in Shikohabad and stays in a village nearby. Has been cycling to the town a distance of some 20 from his house everyday for the past 15 years or so.

Met another guys in his 50’s inside Agra limits. The guys was carrying a huge suitcase on has carrier. He started chatting. Was curious and the usual question answer session happened. The guys works in Agra city and stays in a village outside some 25 kms away. Has been cycling to Agra city for work for the past 25 years. Takes around two hour for a one way commute every day ! His son had just cleared his final interview in Mumbai for a merchant navy position. Was getting the suitcase for his son. Wanted his son to have a nice suitcase when he goes out. That was a really big suitcase – the big ones seen on international flights ! Was real proud of his son.

Reached back Agra city around 8 pm or so. Stayed at the same place. Must have done some 180/190 kms or so. Overall a day of great experiences.

Started the next day for Gurgaon. Got late . Started only by 9 pm. Went via the same Delhi-Gurgaon Highway. Nice ride till outskirts of Faridabad, some 40/ 50 km or so from Gurgaon. Started to get dark just as I entered Faridabad. Had coconut water on the way – Rs 25 per coconut. Lot of local city traffic and lots of dust in Faridabad. I thought that the Faridabad-Gurgaon connecting patch would be nice ride and pleasant ride with small hillocks on both side, but it turned out to be a little tougher than that. It was dark, there were no light and there was a fair bit of traffic going the same way as I was. Had to go at a fairly slow pace. This patch was far nicer in early morning. Reached home around 9 pm.

Overall I liked the Gurgaon Agra patch. Just the Faridabad to GGN patch in the night was tough. Would have been better if I had just left early morning from Agra and did that patch in light.

Gurgaon – Palwal via Sohna and back

Did this ride 100 km round trip ride yesterday. Over the next few months planning to figure out a good way to bypass the Manesar/ Dharuhera patch (for Jaipur route) and the Faridabad patch (for coming back from Agara. Also, there seem to be some quite interesting routes in the triangle formed by Gurgaon-Jaipur-Agra.

For the Agra route bypass, decided to explore the route that goes via Sohna and then connects to the Agra highway at Palwal. The 20 odd kms from Gurgaon to Sohna  is a pretty decent route – farily wide at most places but narrow at places due to road widening going on – and a bit dusty overall. The 30 odd kms from Sohna to Palwal is really nice – going through villages – two lane road but well maintained with sparse traffic and no dust. The truck traffic on the Gurgaon –Sohna patch was surprisingly rash – but I have seen a few other patches like these where for some reason unknown to me the trukers seem to drive a bit rash – very uncharacteristic of them though. Overall I’ll prefer to use this route while coming back from Agra in case I am likely to hit Faridabad in dark. Also, the whole 50 km patch from Palwal to Gurgaon is low congestion road and easy to maintain a good consistent speed on the whole patch.

The last few weeks have been good fun exploring this side of the country. Really like the dhaba food here. A lots of cycles on the road so found the motorists to be comfortable and fairly careful around cyclists as long as you don’t get directly in their way or cut across or something. In fact found riding a cycle easier on a crowded road than my jeep. Somehow the traffic felt more rash when I was on a vehicle compared to a cycle..! Looking forward to exploring more…

hi,
i m yudhisthir. i am planing to go jaipur in this month

You are like idol for those people who really want to do something. Really I am very impressed. Great Job.

Hi, always I used to check web site posts here in the early hours in the dawn, as I like to gain knowledge of more and more.