Was in Kolkata in early Feb visiting my in-laws. During my last few visits, I had been doing smallish rides exploring the city.  Decided to go for longer rides this time.

Kolkata – Kharagpur (short off ) and back

This was a round trip of a little over 200 km on the highway connecting Kolkata to Khargpur (NH6). Took around 12-13 hrs to complete the ride. Crossed the Hoogly via Vidyasagar setu. Nice experience crossing the Hoogly and a great view around. Went on to the Kone Expressway. Not much of an expressway though – more like a city road – crowded road. Connected on to the highway. The highway is wide and easy enough to ride. Traffic is there but that’s not much of a bother as the road is a wide one. But found it to be pretty polluted. There was a perceptible presence of some kind of industrial smoke throughout the ride along with a bit of dust. Not one of my most pleasant experiences. Turned back some 20/30 km short of Kharagpur. 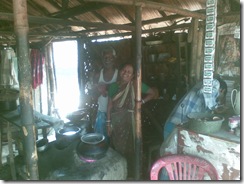 Kolkata – Ride along Durgapur expressway and back

This was again a round trip of a little over 200 km . The ride on the Durgapur expressway turned out to be one of my all time best rides. It takes around 30 kms or so to get out of the city traffic. Took a longish way via the Airport. Crossed the Hoogly via a small bridge around an area called Dakshineshwar There is a Nivedita Setu there, but it seems even motorised 2 wheelers are not allowed on that one. If i remember correctly, I hit the Durgapur highway some 15 odd kms past Dakshineshwar. Even this 15 km patch was pretty decent.

The main Durgapur Expressway turned out to be really nice. Though an expressway but there were 2 wheelers and cycles on the route. Very sparse traffic. Straight unending highway. Very less pollution/ smoke. Crossed Singur on the way. Must have gone some 50 odd kms on the main durgapur expressway before I turned around. Beautiful ride. Planning to a longer ride one this route the next time I am in Kolkata. 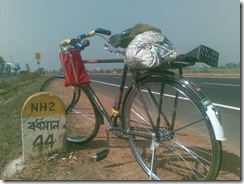 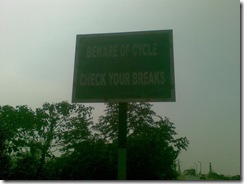 Have always enjoyed my Kolkata rides - especially the Durgapur one -  as well as the hustle and bustle of Kolkatta city. Lots of cycles and 3 wheeled cycles on the road. Though pretty crowded at places, but found the motorists to be pretty careful around those on cycles and showing a lot of patience even around those coming in the way/ cutting across.  Almost felt as if those on cycles have the first right of way ! Very strange feeling…