The tour was from Bangalore to Jaipur via Kolhapur, Pune, Bombay and Ahemadabad. Around 2400 KM’s, done over 22 days with two days of break. Used to ride around 10 hours a day, around 120 KM on an average everyday with lots of breaks for tea an mini meals. Started on Saturday 15th of May and ended the tour on Saturday 5th of June. 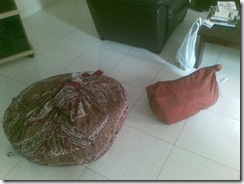 Earlier plan was to go to Jaisalmer. Dropped that plan since Jaisalmer was not connected by the Golden Quadrilateral highways and in any case I would have run of time. The earlier route was straight up via Solapur –Aurangabad – Indore-Ratlam. Changed the route after the first few days since this route was on regular NH and not the Golden Quadrilateral ones and also this route turned out to be an arterial route. Check out the daily blog notings for comparisons between the different type of highways.

Nice and comfortable ride – around 1.5 X times tougher than the Kanyakumari ride (which was a luxurious one). Overall level of effort at around 65%. Average cruising speeds ranged from 12kmph to 20+ kmph depending on terrain. Kept around 20 to 25% of the total time for regular breaks. Wind direction throughout was from west to east and pretty strong at places. That resulted in cross wind most of the way till Bombay and post that it was mostly diagonal tail till Jaipur.

Temperature levels far lower than what I was expecting. Most of the days the first half (till 12 pm) temperatures were around 38 and the second half temperatures around 41. Highest at Gadag (North Karnataka) with standing peak heat at around 48 and riding temperature of around 45 with consistently high temperatures throughout the day accompanied with warm winds. I mostly ride in the day/ afternoon times and enjoy riding in heat. Gujarat an Rajasthan turned out to be a bit of flop show in that respect.

Used to try and finish the ride by around 4 pm and keep a buffer of an hour to find accommodation. Night stays used to be in lodges / hotels.

Overall the terrain seemed to be uphill till Belgaum and then downhill till Mumbai followed by straight terrain till Jaipur. The only piece of hilly terrain was right at the beginning of Rajasthan from the border towns of Ratanpur/ Shamalji to Udaipur. The approach to Satara , approach to Pune (Katraj Ghat) and the Khopoli Ghats (Mumbai) were nice long downhills. Lot of rolling terrains till Mumbai, but nothing too steep barring a handful of small and steep rolls.

Distinct change in cultural aspects as I proceeded through four states. Breakfasts of Idli/ Dosa in Karnataka turned to Vada Pav/ Poha in Maharashtra and Alu Paratha in Rajasthan. Had great mutton in Kolhapur, my favourite King Burgers in Pune and Kathiyawadi in Gujarat.

The prosperity of Gujarat is very perceptible.People are more gentle and the roadside dhabas / restaurants very clean. Next in terms of prosperity seemed Karnataka. Rajasthan seemed the poorest states amongst the ones I rode and a little higher tendency amongst shop owners to overcharge and try to con you out of your money. 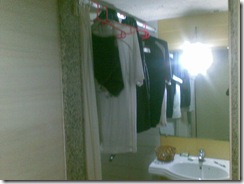 Had felt funny riding into Pune, since that’s we are settled.

Had to change tyre and tubes around two times. Got it done from the local shops.

Took two breaks of a day each after riding for around seven days. The first one at Kolhapur and the second one at Baroda.

At most of the dhabas, the folks used to think that I am a religious yatri. The way they asked me, seemed that they almost wanted me to say a yes. Were very surprised when I said it was out of interest/ hobby and not a religious yatra and I could see a perceptible loss of respect !

Some remarkable sights were the Khopoli Ghats before Mumbai , fort of Chittaurgarh and the Mewar hills in Rajasthan. First time I was riding through the ghats in a cycle. A very long and fast downhill with a beautiful view of the plains below. For the Chittaur fort, it was the first time I had seen it. Its a longish approach from the highway into Chittaur town. And the first sight of the fort was astounding. The fort seemed to form the hilltop boundry for the whole of the huge hill in front of me. Really long fort and seemed well preserved too. Mewar hills were a new experience. The whole Ratanpur to Udaipur route was through the Mewar range, which comprised of a whole range of small hilltops. The hilltops were not too high and it almost seemed that there was a house on top of every hilltop and a shop at the bottom of it. 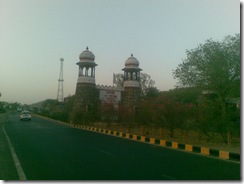 Had a very funny feeling from end of ride till almost two weeks after that. Felt funny taking a taxi to Delhi airport from Jaipur and then taking the flight. Felt funny going to office, reading morning paper, browsing on internet, watching TV. Felt as if I was doing all these tasks for the first time. Was planning to start to write down a ride summary (s) for a past few weeks, but never came around to doing it till today.

You are amazing. Had also read your BLR-KNKY trip. Doing this alone, on a roadster and with the minimum of so called necessities is just awesome.

Sir, you are an inspiration.

Read your posts here and on BZ forum too. Great trip and great trip report. Liked the reason for choosing the bike. Hope you do more such trips that inspire us :)

Thank you for sharing such a piece of great information. To get best discount and deals on domestic and international flights! Click here to know more Book Bengaluru to Jaipur Flights and get the best flight rates and deals on Domestic flights.